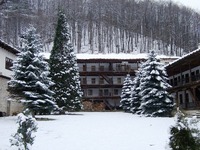 Latest review: I need the email to make a reservation in the Troyan Monsatery and I cannot find it.

The Troyan Monastery “ Holy Mother’s Assumption” is situated in the northern folds of the so called Troyan Balkan (Central Stara Planina), at about 400 meters above the sea level, on the left bank of the Cherni Osam River. It is 10 km southeast of Troyan, between the villages of Oreshak and Cherni Osam.

One can reach Troyan Monastery driving along the road from the town Troyan towards the resort village Oreshaka (famous for its rural tourism opportunities). There are lots of signs which are indicative of the monastery’s location.

Stauropegial Troyan monastery is the third biggest monastery in Bulgaria and the third in significance as well.
According to the monastery’s chronicles, Troyan Monastery was established in the beginning of 17th century by several hermits who also brought with themselves the miracle-working icon of “Holy Virgin Troerouchitsa” (three-handed Holy Mother). The monks won the respect of the local residents who started visiting them for prayer and advice. Subsequently, a church consecrated to the Holy Virgin was built.

The Monastery lived through hard times (between the periods when it was first established until 1830) when it was often assailed and completely destroyed and all monks were brutally killed.

The monastery was dependant on the Greek bishops of the Lovech Eparchy who abused their power and used monastery’s lands and forests for their own enrichment. Later on, in 1830 a delegation of monks visited the Constantinopole (Istanbul nowadays) Patriarhy to declare their request for religious, economic and administrative independence of Troyan Monastery.
The supportive letter by the metropolitan bishop of Troyan, Ilarion helped a lot to the monks to achieve their aim.
Troayn Monastery was declared “stauropegial” in 1830 with a special charter signed by the ecumenical Patriarch (this means that the monastery was exempted from the jurisdiction of the local bishop of Lovech distict and was directly subjected to the sovereign religious power and independent control). Gradually, Troyan Monastery has developed into a cultural and religious centre and in this way it has expanded its power. 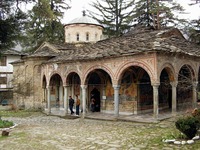 With the support of the local people, all residential buildings in the monastery were expanded and a new church “Holy Mother’s Assumption” was erected in 1835. The monastery church is of one of the most interesting places in the monastery, as it was built by the prominent master Konstantin from Peshtera.
Zahari Zograf, one of the most famous mural painters of the Revival Period, painted the incredible frescoes in the monastery church which fascinate every visitor. At that time the present residential premises on eat, west and north and a small wooden chapel were established as well. The 5-storey church tower was built by the master Ivan in 1865.
During the 19 century Troyan Monastery was a famous literary and revolutionary centre. Eminent writers worked there and due to their common efforts a school was also founded. Later on, the patriotic mission of these great people turned into a tradition.

Troyan Monastery was also an asylum for rebels during the time of Ottoman Rule.
In 1872, Bulgarian Apostle of Freedom Vassil Levski set up in the monastery a secret revolutionary monks committee which was headed by the Father Superior Macarius.
Four years later, Troyan monastery became a citadel of the 1876 April Uprising. The monk room, where all important revolutionary actions were discussed, has been preserved in its original condition. During the Liberation Russian-Turkish war, Macarius transformed the monastery complex into a field hospital for Russian soldiers.

The present Bulgarian Patriarch Maxim was a novice in the Troyan cloister.

Troyan Monastery is one the three stauropegial Bulgarian monasteries (the other two are Rila Monastery and Bachkovski Monastery).

At present, the Troyan cloister is a complex of a main church and residential buildings, as well as two chapels-“ St Nikolay the Miracle-Worker” and “St. John the Baptist”.
Monastery’s area consists of two yards: north, middle which is earmarked for guests (worshippers) and a south, prayer where the church is situated.
Three-storey residential buildings are built in the period 1835-1855 and they are in the style of the Bulgarian National Revival Period.

The main church of Troyan Monastery, “Assumption of Virgin Mary” was built in 1835 by the prominent master Constantine from the village of Peshtera.
The church is impressive for foreign visitors with its imposing, extraordinary architecture. The iconostasis of the main church made in 1839 is a supreme masterpiece of woodcarving. The Troyan Monastery is known for the creative work of the eminent frescoes painter ZaharyZograph who painted both the exterior and interior of the main church in 1847-1848. 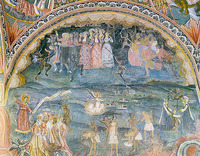 Along with the traditional scenes “Prophets”, “Evangelists”, “Jesus Miracles”, the compositions Doomsday and the Wheel of Life and many figures of Bulgarian and Russian artists, Zahari painted another noteworthy portrait, depicting all the monks that lived in the monastery at that time. An interesting painting, which actually does not comply with the cannons of monastery frescoes, is the one on an outer wall of the living buildings.
Last but not least, Zahari Zograph left his self-portrait, side by side with the portrait of the abbot in the window on the north wall. 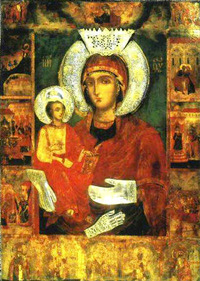 In the main church of the monastery is kept the relic of the Troyan Monastery, the icon miracle-working icon “Holy Virgin Troerouchitsa” (three-handed Holy Virgin) which is a work of art of masters from Tryavna school of Art. According to the legend, the icon was brought from Mt Athos and it was left in Troyan Monastery in 17th century when the monastery was first established.

Another impressive architectural monument of the Troyan Monastery is the 5-storey church tower which was erected in 1866 by the master Ivan. The upper levels of the tower were destroyed in 1898 and it was restored to its original condition in 1987. It is richly decorated with interesting compositions, figures of archangels and saints.

The Troyan Monastery is also famous for its incredible wood-carving.
The oldest carving is the marvellous woodcarved iconostasis of the chapel „St.Nikola” which is distinguished with its genuine artistic qualities. It was in the style of the Trayvna School of Art and it was created by Senior Monk Kipriyan in 1794. Another amazing work of art from 18 century is the woodcarving of the iconostasis in the chapel “St. John the Baptist”.The most significant work of woodcarving is the gold-plated iconostasis in the main church which was created by Nikola Mattev from Novo Selo village in the period1839-1840.
The wood carving in the St. Nikola Monastery Chapel, created by Senior Monk Kipriyan in 1794 is amazing, too.

Besides works of art, many masterpieces of applied arts and crafts are preserved in the museum’s collection of the Troyan Monastery.

The Troyan Monastery offers decently equipped rooms with their own sanitary facilities.
Around the monastery area there are several pubs and snack bars where everyone can taste the famous plum brandy, made according to ancient recipes at the monastery.

One can visit the town of Troyan, only 10km away from the Troyan Monastery, which is among the 100 Bulgarian tourist objects.

Those who are curious to explore the world of nature might visit the Natural Science Museum in the village of Cherni Ossam (4km).

Sopot Convent and the house-museum of the famous Bulgarian writer Ivan Vazov can be visited in the town of Sopot (approximately 25km from the monastery).

I need the email to make a reservation in the Troyan Monsatery and I cannot find it.

Years ago when visiting Bulgarian friends in Varna, I bought a beautiful home/house icon on a little market in front of the museum. Recently my son in law bought the book Bulgarian Icons by Atanas Bozhkof and I was very surprised to discover that my icon looks exactly like the one in your monastery : MaterDolorosa
with the handkerchief. I thought it would be nice to let you know.