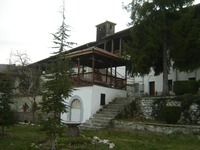 Latest review: I am interested in three things. 1.) are there monasteries in Bulgaria that accept traveling guests (tourists) for overnight lodging (or longer); 2.) are there any former monasteries that now operate as hotels or lodges that accommodate travelers; 3.) Was the Grand Monastery hotel in Pamporovo, Bulgaria†actually the site of a monastery at one time?
Thank you for any information you can provide.
Edward
Edward Connolly, 31.07.2014
Post a comment.

The Kuklen Monastery “St.St. Kozma and Damyan” is situated about 2,5 km to the southwest of the village of Kuklen in the Chernatitsa part of the Western Rhodopes Mountain, 8km to the west of Assenovgrad and about 15km south of Plovdiv city.

The Kuklen Monastery was established during the Second Bulgarian State and it was mentioned in the 11th century in a document describing the properties of the Bachkovo Monastery. Evidence for the cultural influence of the monastery was found in the end of 17th century-beginning of 18th century. It is believed that the monastery was named after the saint bothers Kozma and Damyan for their curative capabilities. The monastery emerged as a religious cloister around a spring of curable waters and according to the legend, it cures mental disorders.

In the 17th century the Kuklen Monastery was a major cultural centre which contributed to the education of grammarians, calligraphers and transcribers, such as the priest Annanii, Krustju the Grammarian, the priest Avram Dimitriev, the teacher Evstatii, the priest Sider and many more.

During the Ottoman Rule the Kuklen Monastery was protected by Turkish rulers because of their families who have been cured in the monastery. It has also survived during the time when Christians have been turned into Muslims in 1657. At that period 33 monasteries and 218 churches in the area between the town of Kostenets and Stanimaka (nowadays Assenovgrad) have been completely devastated.

During the Bulgarian Revival period a monks’ school has been housed in the Kuklen Monastery. In the end of 18th and the beginning of 19th century, the monastery fell into the hands of Greek monks who painted out Bulgarian murals and made on them inscriptions in Greek. Therefore, upon renovation of the church, two layers of frescoes have been found.

The Kuklen Monastery has been preserved in its authentic condition until the 20ties of 20th century after that consecutively the half of the northern and the whole southern wings were completely burnt. Nowadays the western wing and parts of northern are still preserved.

At the moment the Kuklen Monastery is operational and it is opened to visitors. It consists of two churches, residential and farming buildings (from 19th and 20th century) and a big holy spring nearby. The complex is situated on three levels, encircled by a yard. The lowest level belongs to the prayer room and the hospitality room begins from here and passes through the upper level where the worshippers’ zone was situated in the past. Monks cells are located in the highest part and they are connected from the south to the premises where the food has been stored.

The main church of the Kuklen Monastery “St. Kozma and Damyan” dated back to the 15th century is cross-shaped building with no domes and two narthexes. It looks like a cross. In the 17th-18th century the church has been widened to the west and in the 19th century a new narthex was added. Fragments of the impressive composition “Doomsday” dated back to the 17th century are preserved on the east wall of the narthex.

Valuable manuscripts and books are kept in the library of the Kuklen Monastery. The manuscript “Kuklenski pesnivets” has been kept there for decades and it was transcribed and ornamented in 1337 for Bulgarian Tsar Ivan Alexander.

The Kuklen Monastery is famed for its curative spring “St. Bezsreburnitsi” and it is believed that the water in the holy spring is curative and it heals mental disorders. The official holiday of the monastery is marked each year on the 29th of June, St.Peter’s Day when the miracle-working icon of St.St. Kozma and Damyan is taken out of the church.

The Kuklen Monastery offers accommodation for 50 visitors. However, food is not offered, but there is a dining room providing cooking facilities.

The famous Assenova Fortress is a must-see place in the region since it lies only 11km away from the Kuklen Monastery.

I am interested in three things. 1.) are there monasteries in Bulgaria that accept traveling guests (tourists) for overnight lodging (or longer); 2.) are there any former monasteries that now operate as hotels or lodges that accommodate travelers; 3.) Was the Grand Monastery hotel in Pamporovo, Bulgaria†actually the site of a monastery at one time?
Thank you for any information you can provide.
Edward