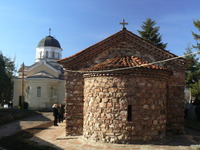 Latest review: Beautiful place to visit in a day.
Best greetings to our host, Elena
Enzo, 03.05.2018
Post a comment.

The Kremikovtsi Monastery is located in the southern part of the Balkan Mountain Range, 3km away from the Sofia’s quarter “Kremikovtsi” in the so-called area “Gradishteto”. It is built on a rocky terrace from which stunning beautiful scenery to the vast Sofia’s plain and the Sofia capital city is revealed.

The Kremikovtsi Monastery is easily accessible when you leave Sofia and drive through the Kremikovtsi quarter. There are no signs, but the dome of the new church is visible from a few kolmetres distance so that the visitor can hardly lost his way to the monastery’s gates.

History of the monastery

It is believed that the Kremikovtsi Monastery was built during the reign of the king Ivan Alexander (1333-1371), but there is certain evidence for its existence from the 15th century. When the Ottoman troops conquered Sofia city in 1382, the monastery was completely destroyed. The first record for the Kremokovtsi Monastery dated back to 1493. During that time the local lord Radivoy restored the ruined church “St.George” and renovated its wall-paintings in the memory of his two children who died during the time of the massive black death outbreak in 1492 . The roof of the temple was destroyed during an earthquake in 1503 and a new one was built, but with another donator’s inscription from 1611, announcing the complete renovation of the church.

During the Ottoman Slavery the Kremikovtsi Monastery was an important literary and cultural centre for Sofia’s residents and many liturgical books have been transcribed there. After the martyr’s death of St. Georgi Sofiiski (i.e. George of Sofia), some of his relics have been transferred in the monastery.

Like most of Bulgarian monasteries, the Kremikovtsi Monastery was s shelter for revolutionaries from the period of Ottoman rule.

About 20 nuns from Malashevsko settled in the Kremikovtsi Monastery after the Liberation of Bulgaria and contributed to the exhilaration and the popularity of the monastery. The famous Bulgarian writer Ivan Vazov had visited the monastery in 1897 and then wrote an extraordinary itinerary for it. The construction of the new big church “The Shroud of the Holy Mother” began in 1901 and it was completely finished in 1907. Meantime, next to the western wall of the kitchen, a residential building for the nuns has been built. The rest of residential buildings dated back to the 30tis of 20th century.

Until the 50ties of 20th century the Kremikovtsi Monastery was a convent as during that time 32 nuns were living in the monastery. After that soldiers settled in the monastery and they have been accommodated in the monastery for 18 years. A part of the buildings was conflagrated and many of the murals were painted out.

Nowadays the Kremikovtsi Monastery was awakened for new life and the restoration of the frescoes in the small church has begun in 1980 and with several halts they have continued until 2003. A new monastery kitchen with flowing water and a big fireplace have been built on the place of the old burnt cook-house. A fountain was constructed in the monastery in 1994 and wooden tables and benches were installed in its courtyard. A massive wooden door was constructed and the walls in the old building and in the main big building were painted. The two churches are maintained in a good condition and in the summer the whole courtyard is green because of the colourful flowers and the lush verdures.

At the present the Kremikovtsi Convent is functional and it consists of mainly two residential buildings and two churches. The oldest building there is the church “St.Georgi” dated back to the end of the 15th century and renovated two times. It is one-domed building covered with semi-cylindrical vault arch, one of the widely spread over Bulgarian lands similar buildings. A few years after the renovation, most probably because of an earthquake, the old narthex was damaged and for that reason it was reconstructed in its present shape and condition.

Frescoes in the old church were created soon after the construction and are closely connected to the traditions of the churches’ art-painting from the period of Bulgarian Middle Ages. The differences in styles and techniques show that the frescoes in the narthex and those in the church itself are made from various wall-painters at different times. Most of them are painted on a dark background, on which the figures of saints stand out. The composition with the church’s patron St. Georgi on a white horse, stabbed his long spear into the dragon is really impressive.

An external narthex was built and painted in the 18th century as an addition to the church, but the only reminiscence of it is a preserved scene from the Doomsday.The portraits of the donor Radivoj and his family, as well as the portrait of the saint Georgi The Victorious are among the most distinguished frescoes in the narthex which were created in the 15th century. At that time the northern, southern and western wall of the narthex were painted as well. The images of Archangel Michael, St. St. Constantine and Elena, saints-warriors Prokopii, Teodor Stratilat and moments from the life of Holy Mother and St. Georgi are among the most remarkable wall-paintings.

The second church in the Kremikovtsi Monastery “The shroud of the Holy Mother” was built within the period 1901-1907. It represents an extraordinary temple with beautiful wood-carvings and a wonderful master-created icon “St.Virgin Mary”.
Some of the relics in the Kremikovtsi Monastery are a Gospel dated back to 1497, having been ordered to be written by the Sofia’s metropolitan bishop Kalevit, beautiful calligraphic scripts, and a wooden iconostasis dating back to the 17th century. All of them are kept in the new church.

The residential and farming buildings in the Kremikovtsi Monastery dated back to the 18th-19th century and have been comepletely tenovated in the recent years.

The Kremikovtsi Monastery boasts really impressive and interesting icons. The oldest of them is “Jesus Christ All-Powerful” dated back to the 15th century. Another icon depicts the image of the monastery’s patron from 1667 and several icons dated back to the 18th and 19th century.

At this stage, the Kremikovtsi monastery does not offer accommodation, despite the relatively large residential buildings. The main reason for this is that a single nun takes care of the maintenance of the holy cloister. The courtyard is full of wooden tables and benches, which reveal a marvellous view to Sofia city and can be used by visitors for having a lunch, but only with the meal they bring. The close proximity of the Kremikovtsi Monastery to Sofia city makes it an appropriate destination for a one-day trip for Sofia’s visitors. makes the St George monastery an appropriate destination for a one-day trip of Sofia dwellers.

Beautiful place to visit in a day.
Best greetings to our host, Elena