Latest review: Hi, I want to visit Ivanovo Monastery. Were is the exact location of the entrance? and the opening hours?
Best regards
Serena
serena, 26.07.2021
See all comments or Post a comment.

Ivanovo rock monastery is situated above the waters of the picturesque canyon of the Roussenski Lom River, several kilometers from the village of Ivanovo and 18km south of the town of Rousse.

The Ivanovo monastery is easily accessible by car. You need to drive along the road south of Rousse until you reach the village of Ivanovo. The distance from the village to the monastery is only 4km and the road is well-signed and maintained.

Ivanovo Rock Monastery was established in the twenties of 13th century by the monk Yakim who together with his students has built the first rock church at that place. The old church and the rest of the churches in the area form the Rock Monastery “St. Michael the Archangel”. Therefore, the rock monastery is completely different from the other monasteries in Bulgaria. The traditional monastery complex consists of 1-2 churches and a residential building, whereas the Ivanovo cloister represents a network of small churches, chapels and monks cells hewn into the rocks.
During the whole period of Second Bulgarian Kingdom, the monastery had developed strong relationships with the kings of Tarnovo. As a result, famous monastery-donors were the kings Ivan Assen II, Ivan Alexander and many other representatives of royal families whose portraits are still preserved nowadays. Even one of Bulgarian kings, George-Tervel (1280-1292) has decided to spend the end of his life in one of the monastery’s cells where the death found him. His tomb is situated on the third floor of the so-called “The Baptism room”.

In the 14th century Ivanovo Rock Monastery was a centre of Hesychasm. The monastery had survived until Bulgaria fell under Ottoman Rule and shortly after, but gradually it fall into decline. In the 18th century the shrine was again a place of interest for worshippers who believe in the eternal power of God.

Ivanovo monastery’s rock churches, forming the monastery complex are one of 9 places in Bulgaria, included in the UNESCO World Heritage List. 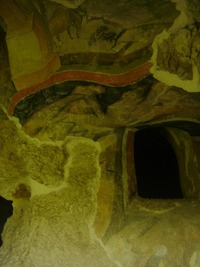 Ivanovo Rock Monastery is not functioning at the moment. It represents a network of about 20 small rock churches, chapels and cells, hewn into the rocks of the picturesque canyon of Roussenski Lom river. Monastery’s premises are situated 32m above the water and they are connected between each other with paths and rock staircases. When the monastery was in its hey-day, rock churches were around 40 and monks cells and other premises about 300. Ivanovo Rock cloister is the most popular shrine of the group of monasteries in Dobrudzha area. Churches in the region of Ivanovo village are part of multiple rock churches, monasteries and cells, which have turned the stunning valley of Roussenski Lom river into a famous Bulgarian spiritual place in the period 10th-14th century.

Interesting is the chapel “Gospodev Dol” which is the richest in frescoes building at the whole monastery’s complex. , The secret of passionate confessions of monks is still preserved nowadays, carved in the walls. One of these frescoes says that Tsar Ivan Terter (1279-1292) spent the rest of his life there and was buried in the monastery.
Another well-preserved church in Ivanovo Rock cloister is the Buried-Under Church. One of its donors was Tsar Ivan Assen II and his dedication to the church was proved by his portrait on which he holds a small model of the church, a typical feature of church donors’ portraits. The third church of the monastery complex, called by local people simple “The Church” is believed to have been founded by Tsar Ivan Alexander. It also has preserved valuable frescoes depicting Gospel scenes in a specifically-modified style of the Emperor Justinian’s Renaissance. 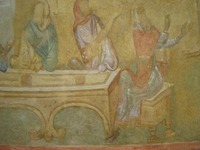 The main church of Ivanovo Rock Monastery, “Holy Mother Mary” is hewn at the height of 38m and impressive gospel and biblical scenes and figures can be found in it. Among them one can distinguish the scenes “The Last Supper”, “St. Joan the Baptist”, images of Jesus Christ, portraits of saints and many others.

Ivanovo rock monastery does not offer accommodation or food, but such places can be found in the nearby village of Ivanovo.

Hi, I want to visit Ivanovo Monastery. Were is the exact location of the entrance? and the opening hours?
Best regards
Serena

See Present Condition of ivanovo monastery and then decide you want to go there or not.

Look at the present condition of our house and now suggest us something new.

I would like to send a letter to Ivanovo Monastery “St. Michael the Archangel” in Bulgaria. How would this be possible? Do they have an email or P.O.Box Address?