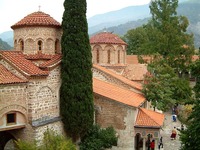 Latest review: We would like to stay at your monastery 1/10/2022. we are 2 friends from spain travelling aronud Bulgary (we are woman). Is it possible share room? Please let us know if you have availability. thank you so much. Merce
merce, 16.09.2022
See all comments or Post a comment.

Bachkovski Monastery is situated in the village Bachkovo, about 7 km south of Asengovrad in Chaya river valley (the valley of the Chepelare River) and 25 km south of Plovdiv in the foothills of the majestic Rhodope Mountain.

Bachkovski Monastery is the second largest Bulgarian monastery and one of the three Bulgarian Stavropegial monasteries (the other two are Rilski Monastery and Troyan Monastery) which draws thousands of visitors, Bulgarian and foreign tourists alike.
The monastery was established in 1083 by the Great Domestik of Western Byzantine Garrisons, the Georgian, Grigorii Bakuriani. In the very beginning, the monastery has been developed as a centre of Georgian monkhood and it has preserved its Georgian character until the end of 12th century. Due to its origin, the monastery combines three cultures – Byzantine, Georgian and Bulgarian.

In 1344, the monastery and the surrounding area came under the rule of the Bulgarian king Ivan Alexander. Bulgarian ruler renovated Bachkovski cloister, patronized it and generously made considerable donations to it. A portrait of Ivan Alexander can be still seen in the arcs of the bone-vault’s narthex owing to his renovation of the building.
Spared during the first wave of enslavement when Turnovo Kingdom fell from power in 1393, Bachovski cloister became the prison of the last Bulgarian Patriarch Euthymius who was exiled
there and whose relics was kept until the 19th century.

Backovski Monastery was renovated in the end of 16th and the early 17th century when the south wing of the building and the present monastery church “Virgin Mary” were built. Bulgarian brothers Cholakovi made also lavish donations to the monastery in the middle of 19th century and, as a result, a new expansion of the monastery was launched, as the buildings in the south inner yard and the church “St.Nikola”, which murals are masterpieces of the prominent Bulgarian artist Zahari Zograf.

A multitude of unique works of applied art were created in the 16th and 17th century in the holy religious cloister of Bachkovski Monastery.

During the 19th century Bachkovski monastery was the most important spiritual and cultural center in the region. 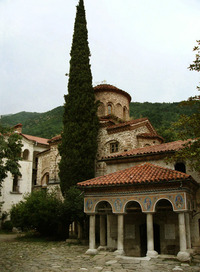 The present monastery’s main church of Bachovski Monastery, Virgin Mary was built in 1604 following Mount Athos churches sample. It was painted out in 1643. Narthex murals are preserved from the first period of its painting. The murals on western walls on both sides of the church entrance are the most remarkable. Frescoes in the lower part of the temple were refurbished in 1850 by Mosko Odrinchanin. Thus, older paintings, dated back to the middle of 17th, century were discovered. Interesting portraits of generous donators, such as the tradesman George and his son Konstantin, as well as Old Testament plots and stages of the religious calendar can be seen in the main church. One of the oldest wood-carved iconostases in Bulgarian lands is preserved in the church. Talented master made the carved decoration with ornamental patterns space interpretation skill.

The most treasured item of the monastery, which is also held in the monastery’s temple, is the miraculous Virgin Mary icon. It dates as far back as 1311, as it was a gift to the monastery from two Georgian travelers-Atanasii and Okrapir. You might be curious to know that a legend tells how the icon ‘was flying’ to Bachkovo from a Georgian monastery and it ‘lands’ in the area “Kluviata”.
From there monks have brought it in Bachkovski Monastery and put it in front of the temple, so as it can observe who comes with a good heart in the holy place.

Besides the main church, Bachovski Monastery boasts two smaller in size churches-“St.Archangels’’ dated back to the 12th-13th century and “St.Nikola”(1834-1837). They are extremely impressive with their well-preserved murals from 1841, painted by the distinguished master Zahari Zograf who also made a mural portrait of himself for the first time.
Saint Archangels Church is situated in front of the western entrance of Assumption Church narthex . Archaeological excavations proved the point that it was constructed in XIII century. It is raised on columns which form vaults where some of the most charming murals of Bulgarian National Revival Period are situated – Gospel Proverbs illustrations. The famous icons painter Zahari Zograf has given every day life and real human characteristics to the images, in which way he gave life to Proverbs characters.

The dining room of Bachkovski Monastery is situated in the southern wing of the monastery building. It was constructed in the beginning of XVII century together with monastery’s main church. An extraordinary marble table from 1601 where monks have eaten was preserved in the dining room. The spacious room was decorated with exceptionally valuable frescoes in 1643. They can be compared to the paintings of 1535 in the dining room of Saint Atanasii Great Monastery in Mount Athos in their respective artistic qualities. Jesey Tree – Christian saints genealogical tree composition is depicted on the vault. In addition, ancient Greek philosophers are painted in its basement. Bachkovski Monastery Wonder Worker Icon Procession composition was painted on dining room’s outside wall by the renowned painter Alexi Atanasov in the middle of 19th century. 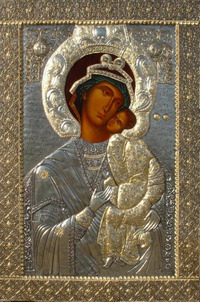 The Ossuary, which is the only building preserved from the initial monastery building, is situated 300 m to the east of the central complex of Bachovski Monastery. This two-storey stone tomb dated back to 11-12 century. Frescoes in the Ossuary are made by the Georgian painter Yoan Iviropulos and they are among the most valuable artistic ensembles of XI-XII century Byzantine culture. It is the only tomb church in Orthodox religious world preserved from Byzantine Komnin Dynasty epoch and painted on both floors with frescoes. The Ossuary was renovated by Bulgarian King Ivan Alexander during 14th century and his portrait still can be seen in the narthex of the second floor.

Exceptional works of applied arts such as marvellous church plates, covers of manuscripts and many others, most of which are treasured in the monastery museum and the rest-in the National Museum of Church History and Archaeology in Sofia, are preserved in Bachkovski Monastery. 103 manuscripts and 252 old-printed books were discovered in the monastery during the past 30 years of 20th century.

There are many shops, bars and traditional restaurants which surround the walking alley near Bachkovski Monastery. You have the opportunity to have a look at the wide variety of handcrafts on sale here by the local vendors. Items range from needlework to locally-grown fruits and vegetables, honey, homemade jams from wild fruits, rare herbs, goat and buffalo yoghurt and cheese, woven baskets, icons and paintings.

Backovo Monastery is on the list of the 100 National Tourist Objects.
Phone number: 03327/277 (International telephone code for Bulgaria +359)

Bachovski Monastery has a capacity of 200 beds, but there is a wide choice of family run hotels and guest houses in the village Bachkovo. The region of the monastery is abounding with traditional restaurants.

Assenova Fortress is situated only 6km away from Bachkovski Monastery. If you go further to the east of the monastery along the valley of the Kluvia River, you will reach two breathtaking waterfalls, next you will find yourself in front of a chapel in the end of the valley and a big karst spring, better known as the holy spring “St.Archangel” will emerge in all its beauty.

We would like to stay at your monastery 1/10/2022. we are 2 friends from spain travelling aronud Bulgary (we are woman). Is it possible share room? Please let us know if you have availability. thank you so much. Merce

is it possible to stay at your monastery guesthouse for some reflection and discernment on March 13-18, 2019 ? I am female travelling alone. Pls. let me know if m y request can be accomodated. thank you

I would like to stay at your monastery from March 5-11, 2019. I am a senior female travelling alone. Your monastery seems to be a quiet place to do some discernment. Please let me know if you have availability on the dates i requested for. thank you

Wankpuffin : For example, if a money back plan makes partial payment of the
maturity amount every five years. Given the circumstances of the time and elections, this can either be helpful or affect Trump's campaign negatively.

She made headlines around the world when she announced she
intended to die - under Oregon's Death with Dignity Act - by
taking a fatal dose of barbiturates, prescribed to her by a doctor, when her suffering became too great.
wankpuffin

miserable failure Awareness of the brain's Neuroplastic behavior gives us the tools to raise our mental faculties to Olympian levels.
Maybe he has a change of heart when he accepts his
destiny. If you bought new ones you would have to break them
in.

oldest wood-carved iconostases in Bulgarian lands is preserved in the church. Talented master made the carved decoration with ornamental patterns space interpretation skill.

south inner yard and the church “St.Nikola”, which murals are masterpieces of the prominent Bulgarian artist Zahari Zograf.jimmyrapper2@gmail.com

south inner yard and the church “St.Nikola”, which murals are masterpieces of the prominent Bulgarian artist Zahari Zograf.jimmyrapper2@gmail.com

Has this page been hacked? I am just curious about all the Arabic on it.

we stayed 2 nights in this beautiful monastery the end of May 2013.We arrived on a festival Sunday -there were hundreds of visitors however the next day it was very quiet. There are lovely forest walks near the monastery with small shrines deep in the forest. We were the only visitors staying and just one monk spoke French -no English! Gates close at 8pm and no meals are provided. Bring a travel jug and basic breakfast otherwise walk outside the monastery for all your meals. The price of a twin bed room was £35 not cheap by Bulgarian standards .A beautiful tranquil setting

Dear Sirs:
Have I contacted the Bachovo Monastery itself or the Bulgaria Monasteries.com?
Thank you for your time and any reply.