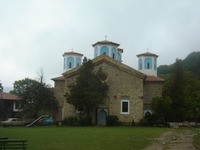 Latest review: Welcome to the world of adult Dating loveawake.ru
Aynstacy, 18.11.2022
See all comments or Post a comment.

Etropole Monastery is located at the foot of the Cherni Vruh peak, Balkan Mountain Range, 2km away from the village of Ribaritsa, 5km away from Etropole town and at the distance of 40 km of Teteven.

The offroad to the Etropole Monastery comes shortly after one gets out of village of Ribaritsa. Those who are enthusiastic may enjoy walking on foot, because it takes only 30min to reach the monastery from the village.

The Etropole Monastery was established in the Middle Ages (1158). It is famous for its limestone base due to the limestone with which the monastery’s church was built. The legend says that the holy cloister’s existence may have been closely related to the name of the hermit Ivan Rilski, who had settled in one of the caves in the ‘Varovitets’ region before choosing solitude life in Rila. Nevertheless, the local people of Etropole declared the place holy and laid the foundations of the present-day monastery.

Etropole “St.Trinity” monastery was one of the biggest literacy centres at Bulgarian lands in XVI and XVII century as the popular Etropole calligraphic and art school was established there. Here is the tranquil place where many Bulgarian writers, artists have done much work for the preservation of Bulgarian culture and literature during turbulent times.
When the present-day monastery church “St.Trinity’ was constructed in 1858, the monk Hrissant found in the ruins of the old church a plate with an inscription clearly showing the year of the establishment of the sanctuary place-1158. The plate was built in the foundations of the newly-built temple.

Repeatedly Etropole Monastery was the hideout of the Bulgaria’s Apostle of Freedom Vassil Levski and it is still preserved.

Nowadays Etropole Monastery is functioning. Its residential buildings were built in 1833 and soon after they were renovated.
Monastery church “St. Trinity” was built in 1858 from Ivan Boyanin from the Bratsigovo architecture school. It is regarded as remarkable monument of Bulgarian architecture from the time of Bulgarian Revival period. The church is cross-shaped, three-nave building with five domes. Two chapels are situated on its north and south side. The church boasts rich collection of unique icons and religious books that are available for everyone to see.

Unfortunately, today the most precious relics of Etropole Monastery are housed in museums, libraries and galleries.

The Etropole monastery offers ideal accommodation within its complex. The price per person per night is 6 BGN. Food is also offered, but to larger groups.

Been there today, Place is kept well. Route which takes you to the falls behind is a bit abandoned wooden handrails are falling apart. Also bit disappointed of path marking. Mentioned in Monastery description Cherni Vruh impossible to find. Same situation for Vranata voda, no marking to get you there. I went up from Etropole to Monastery with yellow path thanks to a local guy which I have met in the city. Way back to Etropole with green path. You can see that tourists are not common there. I have met nobody going there and back. Green path looks forgotten. Soon the nature will swallow it and it will be only in the archives. Feel sorry for it cause its very beautiful region.

I revisited the monastery in February 2014. I had previously visited it several times between 1997 and 2001. The church is now in much better condition but I was disappointed that the small exhibition relating to the history of the museum was no longer in good condition and was not even signposted. If I had not visited the monastery previously and I would not have known of its existence. I should also add that the road across the mountain to Zlatista is now virtually impassable. It was never in perfect condition but it is astonishing that nothing has been done to improve it over the past 14 years.

A nice quiet monastry. Churchmusik get played. The church i self very nice with coloured wallpaintings