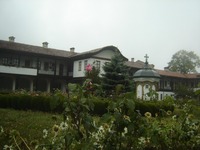 Sokolski Monastery “Holy Mother's Assumption” is situated 10km southeast of the town of Gabrovo, near the village of Charkovo and the popular ethnographic complex “Etura”.

One can reach Sokolski Monastery driving along the road to Gabrovo and then take the turn to the village of Charkovo and ethnographic complex “Etura”. Bus transport is available as well.

Sokolski Monastery “Holy Mother’s Assumption” was founded in 1833 by archimandrite Yossif Sokolski.
He came in the area of today’s monastery together with hieromonk Agapi and the same year they built a small wooden church and a residential building nearby the entrance of a shallow cave. A year later, both constructions were torn down and replaced with the present imposing temple.
The newly-built church was blessed in 1834 by the Turnovo metropolitan bishop, Ilarion of Crete. A school started functioning in Sokolski Monastery in 1836. Thus, the holy cloister has turned into an educational centre where the famous Bulgarian Neofit Bozveli was a teacher.

The monastery took part actively in the struggle for national liberation of Bulgarian nation. In 1856 the detachment of armed volunteers of Dyado Nikola found their shelter here. Turkish defeated the detachment and after that 8 of the revolutionaries were hanged in the cave nearby the monastery. During the April uprising the detachment of rebels of Tsanko Dyustabanov was formed in the monastery and this is the place from where Gabrovo detachment set off for its way to immortality, but freedom. The Apostle Vassil Levski found his shelter here, too.
During the Russian-Turkish War of Liberation the monastery was turned into a military hospital. A small museum collection keeps the relics from the period of the struggles for liberation.

Until 1959 Sokolski Monastery was for monks only.
However, in 1836 archimandrite Yossif Sokolski founded a convent in Gabrovo which was
was torn down and nuns moved to Sokolski Monastery. In the same year, the monastery turned into a chamber. In the northern part of the monastery nuns established a small chapel which houses icons and valuable relics. Two of the most important are the icons “Jesus Christ” and “Holy Mother with the Son” since they were created by the prominent icon-painter Zahari Zograf. 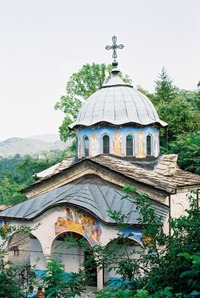 At present Sokolski Monastery is fully operational. The monastery church was built in 1834. It is a beautiful one-nef, one-apse, one-cupola building with two conchas and an open narthex. Its frescoes dated back to 1862 and were made by the priest Pavel and his son Nikolay Popovich, both from the village of Shipka.
The composition “Doomsday” is depicted on the west walls. Frescoes in Sokolski Monastery are distinguished with their simplicity, bright pure tones and deflections from the traditional plot and common rules.
The iconostasis in the church boasts several interesting icons, such as “Jesus the Almighty” , ‘’St. Ekaterina and Merkurii”, pained by Zahari Zograf and the icon “St. George”, a piece of art made by the priest Pavel and his son Nikolay. The icon of “Holy mother with the Son”, situated in a small iconostasis on the left side of the church, is believed to be wonder-working. 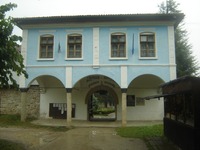 Residential and farm building in Sokolski Monastery were built in Revival style. In the middle of the monastery yard is situated a beautiful white stone fountain with eight spouts . It was built in 1865 by the famous master Kolyo Ficheto.

Sokolski Monastery, including its frescoes, has been recently restored with EU funds.

The monastery offers accommodation and it has at its disposal rooms with either a shared bath on the floor or a private one . Just outside the monastery visitors can have a meal at a small restaurant.

Just few km away from Sokolski Monastery is situated the ethnographic complex “Etura”, which is one of the 100 national historical must-sees.

Good morning,
I am the director of the French travel agency "Triboovoyage" and I prepare a trip for 11 adults
What are your half-board prices for 6 rooms (5 double rooms and 1 single room) for the night from 13 to September?
Do you offer special prices for travel agencies?
Thank you and regards
Dominica

Hello.
I want to make an unusual gift to my friend but I do not know which one.
Advise what you can give?

In advance Thank you

Hi.
I want to make an unusual gift to my friend but I do not know which one.
Advise what you can give?

Hello there! This post could not be written any
better! Reading this post reminds me of my previous room mate!
He always kept talking about this

Do any of your monasteries have working pipe organs in them?
Thank you