Latest review: I will remember for long the evening and night I spent in the Glozhene monastery. My very special thanks for M. the monk-guardian of the holy place!
An amazing place, spectacular surroundings where nature is astonishing and a so quiet and calm place to rest.
Thanks from France!
VDDD, 22.07.2014
Post a comment.

Glozhene Monastery is situated on one stone edge in the western part of the Balkan Mountain range beneath the stunning Kamen Lisetc peak (870m altitude). The monastery is located near the villages Glozhene and Malak Izvor, 10km away from Yablanitsa town and 15km away from the picturesque town Teteven.

The turn to the Glozhene monastery is near to the Yablanitsa town, driving along the Sofia-Varna main road. Shortly after the turn has been taken, you need to take the way to the village of Malak Izvor and ride approximately 5km down a picturesque black but good and smooth road.

Glozhene Monastery “St. George the Victorious” was established in the middle of 13th century by the Ukrainian prince Glozh who settled in the area of the present village Glozhene with the permission of the Bulgarian king Ivan Assen II. He built there a monastery dedicated to the icon “St.George the Victorious”, which he carried with him all the way from the land of Ukraine. The legends says how the icon constantly disappeared from the holy cloister and later on it was found by the monks on a hill near the village where the present day monastery is situated.
Monks interpreted those mystique disappearances of the icon as a sign of God and for that reason they built a new monastery on the hills where it lies today. Actually, two monasteries (in the village and on the hill) have existed for a short period of time in parallel and they were connected with a tunnel, carved into a rock.

The tunnel is the only one which has remained from the time when the monastery was established and only through it the terrace of the monastery is accessible. This tunnel was used many times by the Apostle of Freedom, Vassil Levski as an escape route when he was pursued by Ottoman troops.
Unfortunately, the tunnel was filled up during an earthquake in 1928.

During the Ottoman invasion Glozhene Monastery continued to function, but it faced financial difficulties, because it lost its ownership of the villages Malak Izvor and Glozhene, which had been a bestowed by the prince Glozh. In the beginning of 18th century a new monastery was built, it was called ‘St. George the Victorious”. In order to escape from the violation of Turks, the monks established their cloister on a high, inaccessible rock terrace.

The monastery housed a great number of hand- written books, but the Phanariot bishops from the town of Lovech destroyed many of them. In the 18th and 19th century monks from Glozhene Monastery contributed to the development of school teaching. A monastery school was opened in the 17th century.

The hiding place of Vassil Levski is still preserved in the tunnel. The first revolutionary committee was established near the monastery in the village of Golyam Izvor.

Bishop Kliment (Vassil Drumev) was kept into custody in Glozhene Monastery in 1893. He was kept a prisoner in the monastery 15 months.

Glozhene holy cloister was seriously affected by two earthquakes in 1914 and 1913 when the initially built monastery’s church was destroyed.

Nowadays Glozhene Monastery is functional and it consists of a church and two-storey residential building which form a closed yard around the church, which make the monastery looks like a real castle.

The present monastery’s church was built in 1931 on the place of the old church, destroyed by an earthquake in 1913. The former church dated back to the 14th century and it was richly decorated with incredible murals. 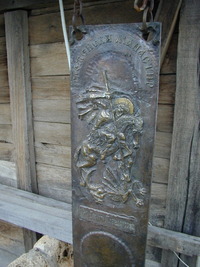 A copy of the antique wonder-working icon “St.George the Victorious” (13th century), brought by prince Glozh, is kept in the monastery. Kiev-Pechora Gospel (1716), numerous manuscripts and two bronze seals are some of the precious written items in the monastery’s cultural heritage.

The Museum of Vassil Drumev (Bishop Kliment) also houses in the holy Glozhen cloister. Famous Bulgarian Bishop has been kept in custody for 15 months in the cell, in which the present day museum is located.

Glozhene Monastery offers accommodation for 20 visitors. However, food is not offered and there are no restaurants in the neighbourhood.
Telephone number of the monastery:+359/International code for dialling Bulgaria/ 09160 388

I will remember for long the evening and night I spent in the Glozhene monastery. My very special thanks for M. the monk-guardian of the holy place!
An amazing place, spectacular surroundings where nature is astonishing and a so quiet and calm place to rest.
Thanks from France!