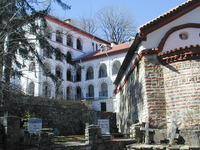 I'm looking to visit with my father this weekend, is this possible? What time is best to arrive?

The Dragalevtsi monastery is located about in a close proximity to Dragalevtsi, a quarter of Sofia city at the foot of the Vitosha mountain.

One can reach the monastery by car for about 20-30 minutes from the Sofia downtown following a well-maintained, asphalt road starting from the centre of Dragalevtsi.

Dragalevtsi Monastery was mentioned for the first time in the Vitosha golden-printed deed of the famous Bulgarian king Ivan Shishman (1371-1393). It revealed that the monastery had been established during the reign of Ivan Alexander (1331-1371), which means the period of the Second Bulgarian Kingdom. It is believed that the monastery was a part of the group of monasteries which arose in 14th and 15th century around Sofia. They were named “Sofia Saint Forest”. The two Bulgarian rulers have made generous donations to the holy cloister, such as money and real estates. That is why local people call it “royal”. After Sofia having been conquest by the Ottoman Turks in 1382, the monastery itself was conflagrated and then abandoned by the monks. 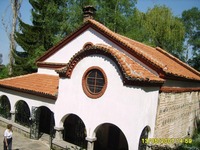 Besides its precious frescoes from three different time periods, the monastery is also famous for hosting a so-called cell school during the Ottoman rule, and producing the Dragalevtsi Testament. Moreover, the Dragalevtsi monastery was one of the active centers of Bulgarian struggles for liberation since it took part in the secret revolutionary activity against the Turks in the mid-19th century. The abbot of the monastery, Genadii, was a close friend and collaborator of the national hero Vassil Levski, and helped him actively in the organisation of revolutionary committees in the area of Sofia.

Dragalevski Convent consists of a church, residential and farm buildings. The only one of which was preserved from the old monastery complex is the church, which is a type of basilica, dating back to the 15th century.
It is richly decorated with two layers of frescoes. Only fragments from several Biblical scenes have been preserved from the original wall-painting in the narthex. 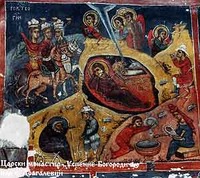 The whole vault arches, the eastern, the northern and southern wall of the narthex are occupied with the imposing composition “Doomsday”. The west faзade of the old church was soon afterwards decorated with the images of Virgin Mary and three of the most popular saints-horsemen-St.George, St. Dimitar and St.Merkurii.

The frescoes on the outside north wall of the Dragalevska church, including the portraits of prominent monks, St.Ivan Rilski and St.Petka Turnovska, were created in the 17th century. Today they are included in the interior of the second monastery’s church, adjoined to the old one. The iconostasis in the church was renovated in the end of 18th century and its carved ornaments were gold-plated. Icons from the 19th century are still kept in the church.
Telephone of the monastery: +359 /International dialling code for Bulgaria/ 2 9673360

Dragalevtsi monastery is a functioning cloister and it has many buildings at its disposal, but it does not offer accommodation or food. You can buy soft drinks or coffee near the entrance of the monastery.

Boyana Church is situated just few kilometers from Dragalevtski Monastery near Vladaya quarter. It is one of the 9 places in Bulgarian under the patronage of UNESCO.

I'm looking to visit with my father this weekend, is this possible? What time is best to arrive?

I’m a sucker for the reality that you undoubtedly counsel meant for the effective use of on line posting products in your own personal blogs. That i go with your help support, despite the fact that indirect, is certainly tremendously preferred. Trainees essential info they will should not have when you happen to be at this point.

is it possible to visit using a wheel chair? Are there disabled facilities in the Monastery?

I am the secretary at St Martin's Catholic Church in Tower MN. This past summer, Rado Gerenev was married in our church - I am told he was baptized at your church. I would like to send the official notification to you but I need a mailing address. Will you please send me that information?