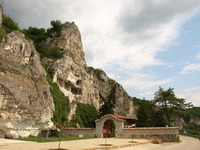 Latest review: Hi, I want to visit the Basarabovo Monastery with a group. Could somebody please help me with a contact phone number? Is there a local tourist guide? How much costs the entrence fee?

The Basarbovo Monastery is situated in the picturesque valley of the Roussenski Lom River in a close proximity to the village of Basarbovo, at a distance of 10 kilometers from the town of Rousse.

History:
Basarbovo Rock Monastery was established during the period of the second Bulgarian kingdom, but its name was mentioned for the first time in a Turkish tax register in 1431. The most famous resident of the monastery was St. Dimitrii Basarbovski. He was born in 1685 in the nearby village of Basarbovo, but he has spent whole his life in the monastery. Even he was mentioned from the clergyman Saint Paisius of Hilendar in his Istoriya Slavyanobolgarskaya, one of the greatest pieces of Bulgarian literature.
After he has died, the monk Dimitrii was buried in church of the village, but his remains were taken to Bucharest during the Russo-Turkish war (1768-1774). At present, they are still kept there.

The archaeologist Karel Shkorpil visited Basarbovo holy cloister in 1911 and then he described in detail this place of beauty, a symbol of eternal faith.
The monk Hrisant settled in the monastery in 1937 and he began to renovate it.
The same year a committee for the construction of a chapel, commemorating the St. Dimitrii Basarbovski, was created. The chapel was built, but he survived only until 1940 when it was destroyed by a flood. Notwithstanding this, the monk Hrisant began to collect donations and he managed to build two cells just opposite the church.

Basarbovski Monastery is the only one active rock monastery in Bulgaria. A green path, which leads believers to the monastery, passes through a beautiful green inner yard and ends at a well which was dug by the monk Dimitrii.
It is believed that the water which is coming from the well is curative. 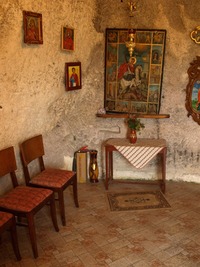 Two rooms and a cave used for a dining room, both built in 1956, are situated in the lower part of the rocks. In order to reach the place where according to the legend, Dimitrii Basarbovski slept, you need to take a deep breath and climb 48 stairs.

To the right, visitors can visit the rock church with a unique wood- carved iconostasis, made in 1941. A large icon of the saint on which he is depicted at full height is surrounded by 10 scenes of life with inscriptions in Romanian (with Cyrillic letters) and Greek .
Other stone stairs lead to a natural cave in which the monk Hrisant was buried.
Now the cave is a bone-vault which hosts a museum exhibition.
Later, the cave sheltered the bones of other deceased monks of the monastery. Some years ago, the bones were buried in the monastery’s graveyard, while the bone-vault currently hosts a museum exhibition.
Telephone number of the monastery: + 359/International dialling code for Bulgaria/ 82 800 765

Basarbovo Monastery does not provide accommodation to visitors.

Only 10km away from Basarbovo Rock Monastery is situated another rock monastery, Ivanovo Cloister, one of the 9 cultural and historical places in Bulgarian under the patronage of UNESCO.

Hi, I want to visit the Basarabovo Monastery with a group. Could somebody please help me with a contact phone number? Is there a local tourist guide? How much costs the entrence fee?

I would really prefer so as to add one other webpage into the endorsed styles everyone provided a while back.

I would love to come and visit your monastery.