Latest review: Cheers pertaining to delivering the latest changes in connection with worry, My spouse and i expect go through additional.

The Patriarch Monastery “Holy Trinity” lies in an extraordinarily beautiful area at the foot of the picturesque Arbanassi plateau, about 6km from the ancient Bulgarian capital city Veliko Turnovo and 1,5 km away from the village Samovodene.

The road to the Patriarch Monastery starts from the suburbs of Veliko Turnovo to the direction of Gorna Oryahovitsa as the turn for the monastery is about 2-3km before reaching the famous resort of Arbanassi.

assumption has been made on the grounds of an inscription which was found during the construction of the new church in 1847. However, other records suggest that the holy cloister arose as far back as the reign of Ivan Alexander and its founders were Teodosii of Turnovo and Patriarch Evtimii. The monk Evtimii was chosen to be a patriarch in Turnovo in 1375 and since then the area on which the monastery stands is called “Patriarsheska”. The Monastery “Holy Trinity” gradually became a centre of the famous literary school “Turnovo school”. The created language rules and the significant spelling reform were introduced by that school. Popular Bulgarian writers were educated in the Turnovo literary school.

The Patriarch Monastery was plundered and demolished during the falling of Turnovo under Ottoman oppression.

The Patriarch Monastery was restored in 1847 with the financial help of the local people, but on a different place, 1km away from the old monastery. At that time a new church was created, a masterpiece of the famous Bulgarian Kolyo Ficheto. The icons and frescoes were painted by the eminent wall-painter Zahari Zograf. A huge earthquake destroyed a part of the monastery in 1913, including the church, the remarkable monument of culture and art from which only the icons and the iconostasis have been preserved. The monastery was completely reconstructed in 1927, but in an altered, simplified style and the design of rebuilt church differs from that of Kolyo Ficheto.

The Patriarch Monastery was a male one until 1946 when the first nuns have come. The monastery is officially declared to be a nunnery since 1948. 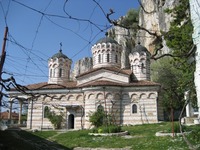 The Patriarch convent was constructed in its present appearance in 1927. At that time the church was rebuilt on the foundations of the old temple dated back to 1847. The church has cruciform shape, three domes, covered four-column arch narthex and two entrances. The bell tower of the monastery, consisting of several bells and a hanging clapper, is housed in the narthex of the holy cloister. Roman monuments with inscriptions from Nicopolis ad Istrum, a Roman and Early Byzantine town founded by Emperor Trajan, are hidden in the altar and the narthex of the temple. There are interesting icons in the iconostasis of the church such as “St. Nikola”, “St. Atanassii”, “Virgin Mary” from 1861, “Jesus the All-Powerful”, “Joan the Baptist”, and wood-carved royal gates dated back to the 19th century, which certainly worth seeing.

The farming buildings are situated to the north of the church and the entrance of the complex is to the south-east. Monastery’s buildings and the chapel “St. Evtimii of Turnovo” are located in the western part of the courtyard. One will admire at the well, dome-shaped and decorated with cherubs with six wings, which lies near the monastery’s entrance.

Some relics are preserved in the Patriarch Monastery “Holy Trinity”. Some of them are the icons “Archangel Michael” from 1663 and “Old Testament Holy Trinity” from 1708.

The Patriarch monastery “Holy Trinity” does not offer food and accommodation. However, you can rent a room in a private house or in one of the numerous hotels in Veliko Turnovo pr Arbanassi and taste traditional Bulgarian cuisine in beautiful old-style restaurants (called ‘mehanas’).

“Shishmanovo Kladenche” which is believed to have been built by the tsar Ivan Shishman can be also visited sine it is not far away from the monastery “Holy Trinity”.

The national tourist places, Tsarevets hill and the picturesque resort Arbanassi are located only 5km from the Patriarch Monastery.

Cheers pertaining to delivering the latest changes in connection with worry, My spouse and i expect go through additional.