Latest review: Thank you, I've been seeking for info about this subject matter for ages and yours is the best I have discovered so far.
Buy high pr backlinks, 20.01.2016
See all comments or Post a comment.

Rozhen Monastery is the biggest sanctuary in the Pirin Mountain region. It lies only 1 km away from the village of Rozhen, at the distance of 6km north-east of Bulgaria’s smallest town, Melnik, and 16km away from the town of Sandanski.

A road to Melnik town leads directly to Rozhen Monastery. Unfortunately, there is no regular bus line from the town. 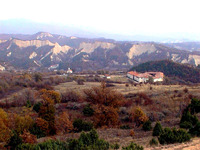 The exact date of the establishment of Rozhen Monastery is not known, but according to annals, the name of the monastery was mentioned for the first time in a Greek manuscript which dated back to the 13th century. At that time Melnik region was ruled by despot Slav, a nephew of Bulgarian king Caloyan (1197-1297). This is the reason why it is believed that Rozhen Monastery was built despot Slav during 12th or 13th century. It is the only monastery in Bulgaria which was restored in the first centuries of Ottoman rule and has survived to the present day.

Rozhen Monastery was mentioned again in a manuscript of the abbot Cosma in 1551. The original monastery’s complex had been destroyed by fire and plundered several times, so the present day appearance of this old holy cloister dates back to 16th century. The main church, the dining room and several residential buildings date back to the same period as well.

Rozhen Monastery was rebuilt in the beginning of 18th century while the main church was renovated in 1732. The heyday of the monastery was in 19th century when it was served as a regional spiritual centre and had possessed numerous lands in the surrounding area.

In the middle of 19th century, Rozhen Monastery has become a shelter for revolutionary activists from the regions. Later on, the monastery has given refuge to the renowned Macedonian revolutionary Qne Sandanski who was buried nearby.

At present, Rozhen Monastery is functional, well-maintained and opened for visitors all-year round.

The monastery has an irregular 6-angle shape, as residential buildings encircle a beautiful yard in the centre of which is lying the monastery’s church. The temple dates back to 16th century, but it was renovated in 1732. The inside walls in the naos, the narthex and chapel of the main church were painted in 1732, with a strong inclination for narration, as a result of which more than 150 subject-matters were illustrated. The majority of murals in the church dated back to the 18th century.

Rozhen Monastery owes its fame above all to its carved iconostases and incredible frescoes. The narthex of the main church is enriched with frescoes from the earliest period (16th century) and the majority of them depict scenes which illustrate the life of Christ Pantocrator after the Resurrection. . According to one inscription, the image of Christ Pantocrator together with the twelve apostles above the entrance gate of the Holy Virgin main church, was painted in 1597. Valuable monuments of 17th century painting included the external southern wall (Doomsday, Jacob's Ladder), dated with an inscription from 1611, as well as scenes from the life of John the Baptist painted in 1622 in the ossuary.
The mural paintings of the Rozhen Monastery as well as some iconostasis icons are exceptionally valuable monuments of Bulgarian pictorial arts.
The visitor of the church of Rozhen cloister may be admired at the picturesque woodcarving of the altar iconostasis and the lectern.

In the north-western part of church is situated the chapel “St. Cosma and Damyan”, richly decorated with wall-paintings from 18th century.
Here is located the earliest iconostasis in Rozhen Monastery, including ornamented frieze with colour wood-carving, to which painted part and icons were added later on. 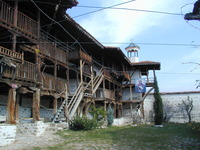 Residential building in Rozhen Monastery dated back to two periods. Monks’ wing which embraces the church from the east, south and east, was built in 16th century. It consists of two-storey building, in which the dining room, abbot’s room, cellars and monks’ cells are housed. There is also located monks’ dining room in which there are complicated murals and fragments of the scene “The Last Supper” , “St. Pahomii and the angel” and others, typical for the decoration of Mount Athos monastery’s dining rooms from the 16th and 17th century.

All the monastery’s buildings were constructed in different periods, with the monks’ dining room, the bone-vault and several farm buildings being the oldest ones, dating back to the period before the fire in the 17th century. Besides well preserved wall paintings, the monastery is famous for its stained glass (the oldest of its type preserved till present days) and unique woodcarvings.

The second, three-storey residential wing was constructed in 18th century with the help of wealthy Melnik residents. A small church tower was built on the roof of the building in 19th century.
The ossuary built in 1597 outside the monastery’s walls is also a part of the monastery’s complex of Rozhen cloister.
It is two-storey church-vault, in the lower part of which are gathered together the relics of prominent monks. Here can be found 12 scenes depicting the life of
John the Baptist.

Bulgarian state and Orthodox Church take care of the preservation of all pictorial monuments in Rozhen Monastery. The restoration of the murals as well as many icons has been completed. An interesting museum’s exhibition, which keeps valuable icons and many other items of religious cult, having been given to the monastery as a gift by Melnik residents and worshippers from all over the world, is must-see for every visitor to Rozhen Monastery.
Telephone number of the monastery:+ 359/International dialling code for Bulgaria/ 7437 222

The monastery does not offer food and accommodation. However, 500 meters down the road to the monastery there is a guesthouse with a restaurant, whereas Melnik, which is about 5km away, is a popular tourist destination with a rich choice of accommodation and catering.

The architectural and historical reserve of Melnik town, which is one of the 100 Bulgarian National Historical objects, is located only 5km away from Rozhen Monastery. Near the monastery are situated the breathtaking Melnik pyramids.