Latest review: Reading through your own weblogs can make me personally wish to create increasingly more.

The Kapinovo Monastery is easily accessible by car from the town of Veliko Turnovo if you follow the road leading to the village of Velchevo. The distance from there to the holy cloister is about 5km. The Kapinovo Monastery "St. Nikola" lies at the foot of the Elena Balkan on the banks of the Vesselina river. It is situated 5km away from the village of Velchevo, but also 8km away from the village of Kapinovo and 14km south of Veliko Turnovo town.
This is one of the biggest monasteries in Bulgaria and is an interesting monument of architecture from the period of Bulgarian National Revival.

The Kapinovo Monastery was established in 1272 during the reign of the king Konstantin Assen-Tih(Quiet) (1257-1277). An inscription on the east wall of the present-day monastery’s church revealed that a temple was erected there in the same year and it was called “St.Trinity”. During that period the monastery was a religious centre of great importance, but it was set on fire when Veliko Turnovo town was invaded by the Ottomans. Local residents from the nearby villages managed to obtain permission by Turkish authorities for the monastery’s renovation.
The Kapinovo Monastery had been conflagrated several times during the period of Ottoman Yoke, the last time it had been in 1789 after that it was renovated in 1835. At that time the present-day church “St.Nikola” has been built. The generous brothers Teodosi and Kesarii Horozovi, locals from the town of Elena, donated a big sum of money for the construction of new residential buildings for the monastery’s monks.

The Kapinovo Monastery was one of the educational and revolutionary centres during the Bulgarian Revival period. For a short period of time in 1794, an abbot of the monastery was Sofronni Vrachanski who has made his transcription of “Istoriya Slavyanobylgarska” exactly there. A literature school was also housed in the monastery.

The Kapinovo cloister played an important role in the preparation for the April Uprising. A huge battle took place near the monastery during the Russian-Turkish Liberation was, as some of the perished Russians were buried there.
Telephone number:+359/International code for dialling Bulgaria/ 061101/312

Currently the Kapinovo Monastery is functional and open to visitors. The monastery complex consists of a church, two chapels, residential and farming buildings. 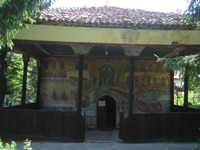 The church “St. Nikola” dated back to the end of 17th century and the beginning of 18th century, but it was renovated in 1835 and it acquired its present condition. It is a kind of basilica without any domes and with wide narthex and entrance, supported by wooden columns and parapets. The monastery’s church was painted with frescoes in 1845 as the most impressive composition is the one of “Doomsday”, a piece of unique art of the master Ivan Popovich. The earliest monument of art-painting of the Kapinovo Monastery is the so called “Kapinovski Monument” dated back to 1700 which nowadays is kept in the National Archaeology Museum in Sofia. The monastery’s church is rich in valuable icons from the 18th and 19th century. Some of the most impressive are two icons in the iconostasis:”St.Iliya” and “St.Dimitar the Horse rider” , as well as the ones in the narthex:”Presentation of the Blessed Virgin”, “Virgin Mary with the prophets” and “Jesus Christ with the apostles”. 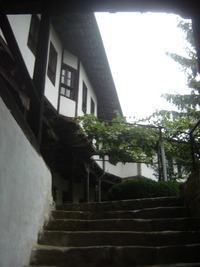 The residential buildings of the Kapinovo Monastery were erected in 1856 by the funds of brothers Horozovi from the town of Elena. The chapel “Presentation of the blessed Virgin” was built in 1864 on the second floor of the residential building. Because of the generous donations of brothers Horozovi, the chapel was richly ornamented with frescoes in the same year. A portrait of the two donors with a replica of the building they had constructed is situated on the west wall of the entrance.

There is a holy spring in the yard of the Kapinovo Monastery.

The beautiful Kapinovo Waterfall is situated in immediate vicinity to the Kapinovo Monastery near the Vesselina River.

Reading through your own weblogs can make me personally wish to create increasingly more.