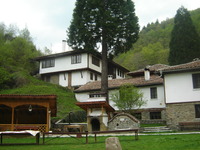 Latest review: Hello from Toronto, Canada:
I am a senior female travelling alone in the Balkans & Central Europe. I am interested in staying at your monastery to do some discernment. I am interested in a single room. FYI: I am physically challenged. i walk with a walker so i would require a room on a lower floor. Thank you for granting my request.
Pearl C Buenafe, 03.09.2018
See all comments or Post a comment.

The Osenovlashki Monastery, popular also as Sedemte Prestola (i.e. the Seven Altars) is situated in the picturesque valley of the river Gabrovitsa in the skirts of the northern Balkan Mountain Range, just at the foot of the Izmerets mountainous peak. The monastery is at a distance of 80km from Sofia and 50km from Vratsa. One can reach the monastery driving to the town of Mezdra, passing through the charming Iskar gorge.

The legend says that the establishment of the Osenovlashki Monastery (the Seven Altars) is related to the name of the famous Bulgarian boyar Petar Deliyan and the rebellion against the Byzantine rule in 1040. However, another legend, connected with the name “The Seven Altars” suggests that a different aspect of the foundation of the monastery. According to it, the holy cloister was set up in the 11th century by 7 boyars (or by 7 brothers under an alternative version of the story), who are believed to have came from Besarabia and they settled together with their Slav families in the Balkan. Their settlement in those lands is closely related to the is also related to the establishment of 7 villages in close proximity to the monastery – Osenovlak, Ogoya, Ogradishte, Bukovets, Leskov Dol, Zhelen and Lakatnik.

The Osenovlashki Monastery was deserted in the beginning of the 19th century, all of the monastery’s buildings were razed and its territory became an ownership of a Muslim family from the town of Roman. The renovation of the monastery began in 1824 with the help of Dimitraki Hazhitoshev from Vratsa and the metropolitan bishop Dositeya. They redeemed monastery’s lands and the monk, Paysii from Lovetch, who has been accommodated there, has constructed a residential building. The monk Hristophor established a monastery school in 1848 as one of the teachers being he himself.

In the epoch of the National Liberation struggles of Bulgarian nation, the Osenovlashki Monastery was repeatedly a shelter for revolutionaries. There their protection found Bulchan voevoda, Sofronii Vrachanski and the Apostle of Freedom Vassil Levski. 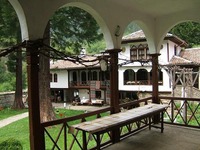 Currently the Osenovlashki Monastery is functional and it welcomes visitors. The monastery consists of high stone wall and the church is situated in the middle of the inner courtyard. The complex includes also a church tower and two residential buildings, most of which are guest rooms. The courtyard is quite impressive for every visitor because of its well-maintained garden with many flowers, blooming bushes and old trees, one of which his one-century sequoia.

The belltower consists of two bells (dated back to 1799 and respectively to 1940) with wooden and steel clappers-the latter made of metal material taken from a Roman fortress, situated in close proximity to the monastery. The Monastery also houses its own library which keeps old Orthodox books, including one which a gift from the Russian Empress Ekaterina the Great.

The belltower consists of two bells (made in 1799 and 1940 respectively) and wooden and metal clappers – the latter made of metal taken from the Roman fortress in 1799.The Monastery’s church dates back to the 11th-12d century, but due to its numerous renovations during the past centuries, it has lost its authentic architecture. However, its architecture is unique and incomparable to none. Stoyan, a master from Troyan has restored the whole church in 1770 and at that time its main part has acquired today’s architectural appearance from the early Bulgarian Revival period. It has been partially reduced to ashes, but soon after rebuilt in 1815. The open narthex to the church was built in 1868. The thing which every visitor finds unique with the church is its unique design of seven separate altars – something that has no architectural equivalent in any other Bulgarian church. The four main altars form a cross and are separated from the main hall by inside walls. The other two altars are closer to the door and are even more isolated. The 7th altar, though, is the one situated just to the opposite of the entrance of the church.Each altar represents a separate chapel with its own wall paintings and iconostasis and is dedicated to a Bulgarian saint (or saints). All wall-paintings in the church are more than 100 years old. Iconostases in the central church premises, as well as those in the outer niches, are unpolished, with simplified wood-carving and date back to the 18th century. Icons date back to 17th and 19th century, as the most distinguished one is the icon, depicting “Day of Judgement” . Besides the altars, the visitor will be amazed with the massive wood-carved and painted chandelier with religious images, so-called “The Horo” (Dated back to 1815), consisting of 15 parts with coloured wood-carved scenes.

The Osenovlashki Monastery offers accommodation, but all rooms do not have separate WC and a bathroom. The monastery is quite popular and we do recommend booking in advance, since the monastery is a favourite place to visit for weekend trips and during religious holidays.
There is a small pub close to the monastery’s gates, but we advise you to bring food which suits your tastes and preferences, because there is no diversity of meals in the pub. The guests can use a fireplace with tables and benches just by the river, passing near the monastery.

Hello from Toronto, Canada:
I am a senior female travelling alone in the Balkans & Central Europe. I am interested in staying at your monastery to do some discernment. I am interested in a single room. FYI: I am physically challenged. i walk with a walker so i would require a room on a lower floor. Thank you for granting my request.

I am female(artist, writer) and I am looking for a place for accomodation in monastery, but I do not know if your monastery is for men or...? I need it in February-March. What are the price?
Thank you if respond
n.