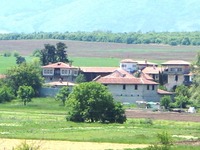 Latest review: I am a retired 73 yr. old female travelling alone in the Balkans & Central Europe. It is my lifelong dream to see as many countries as I can and Bulgaria is a very impressive country which can help me in my discernment. Do you have an available single room march 11-16, 2017 ? Thank you for accomodating me.
pearl buenafe, 03.09.2018
See all comments or Post a comment.

Arapovski Monastery is situated near the village of Zlatovruch(its former name is Arapovo) , 10 kilometers away from the eastern part of Asenovgrad and 30 km from Plovdiv city.

The monastery is easily accessible from Assenovgrad by following the road to the town of Purvomay. The road is well signed and you should look to the right signed turn to the cloister.

Arapovski Monastery was founded in the middle of 19th century in close proximity to a holy spring. It is believed that its founders were the archimandrites Sophronii and Gerasim.
Arapovski Monastery is the only one monastery in Bulgaria which was constructed in the region during the Ottoman slavery.

The monastery used to be a center of Bulgarian national spirit in the fights against the Greek and the Turkish influences. Therefore, the holy cloister has special historical value since a local secret revolutionary committee was founded here. It was led by the monastery abbot father Gevrasii.

A school for priests was opened in the monastery in 1868.
During the period of April Uprising the mother of famous Bulgarian writer Ivan Vazov and her children dwelled in the monastery. During the Russian-Turkish war of Liberation (1877-1878), Dryanovo cloister had been conflagrated by the Turkish troops, but subsequently it was restored. 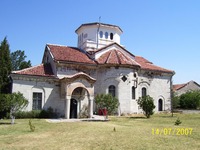 At present, the monastery is fully operational.
The monastery complex was built by Rhodopes masters from the village of Yugovo, led by Stoyan Uzunov (Gudevski).
The main church “St.Nedelya” was built in 1859. It represents an impressive three-domical building, with a nave and 2 aisles, with a cupola and a narthex.
The altar’s iconostasis in the temple and four small iconostasis at the columns were masterpieces created by the famous painter Stoyan Uzunov.
Wall-paintings in the church were made in 1864 by the painters Georgi Danchov and Alexii Atanassov.
More than 150 scenes are painted in the frescoes of the church. Besides the traditional evangelic scenes, here we discover unique scenes depicting the life of the monastery’s patron, St. Nedelya, as well as John the Baptist and St.Paraskeva.
An earthquake destroyed the church in 1928 and its murals, which later on were renovated.
The life and work of the saint brothers, Cyril and Methodius, can be revealed here for the first time in Bulgaria’s monumental painting. One of the most valuable icons of the monastery is the one of the Holy Mother that is considered to be miracle-working. It can be seen to the right of the southern entrance. It is painted so that its sight always follows the worshipers. 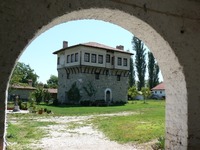 Outside the monastery’s walls, not far away from the northern gate of the monastery, is situated the holy spring. The first chapel of the monastery that is still preserved was built around it. The chapel was painted in 1870 by Georgi Danchov.
The fountain in it is one of the most interesting monastery stone fountains. Its front side is made of five big stone blocks: one as a cornice, two on the sideways and two forming the body structure of the fountain with figures and pictures in relief.
The monastery is distinctive with its great diversity, impressive architecture and mixture of styles.

However, the most interesting building in Arapovski Monastery is the unique residential tower, built by Angel Voivoda, one of the most famous defenders in this region during the Ottoman oppression.
The tower is rectangular and it had been used both as a watchtower and a residential building. The first two floors are made of stone and have narrow windows that served as loop-holes. The third floor represents a residential part of a wooden frame-built construction with strongly-outgoing bays. There are four rooms here which are currently rented to visitors of the monastery.

The monastery offers accommodation to visitors, several rooms with shared bathroom. Food is not offered.

Only 10km away from Arapovski Monastery, you can visit Assenova Fortress, one of the 100 Bulgaria’s National Historical Objects. 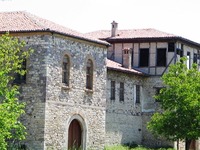 I am a retired 73 yr. old female travelling alone in the Balkans & Central Europe. It is my lifelong dream to see as many countries as I can and Bulgaria is a very impressive country which can help me in my discernment. Do you have an available single room march 11-16, 2017 ? Thank you for accomodating me.

Very good written article. It will be supportive to anyone who utilizes it, including me. Keep doing what you are doing – can’r wait to read more posts.

The audio will be awesome. You might have several extremely skilled performers. My partner and i want an individual the most effective regarding accomplishment.

It was led by the monastery abbot father Gevrasii.

In memory of m beautiful Bulgarian wife I want to tour the monasteries of Bulgaria where I can stay a few days at a time. I promised that i would do this. I am an 86 welsh retired aviator living in Winchester, near the Cathedral.