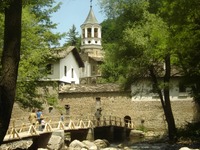 Latest review: Hi! Is it possible to reserve a double room for 2 persons for one night in next september 20? And how much?
It's a experience very special for us. We come from Canada. Thank you very much.
Éliane Laberge, 30.07.2019
See all comments or Post a comment.

Dryanovo Monastery is easily accessible by car, driving along the main road from Veliko Turnovo to Gabrovo. The offroad to the monastery starts about 2km after the one existing to the town of Dryanovo.

Draynovo Monastery was founded in the end of 12th and the beginning of 13th century, as it was initially located nearly 2km far from the present monastery complex.
The monastery was one of the main centers of Hesychasm and it was a shelter to many monks in the 14th century. The holy cloister was destroyed by the invading Ottoman troops in the end of 14th century. Subsequently, it was reconstructed in a new place in the area popular as “The big St. Archangel”. Unfortunately, the second monastery shared the cruel fate of the first one.

Dryanovo Monastery was built in the end of 17th century at the place where it is situated nowadays. In fact, at that time a church and a small chapel “Holy Mother’s Assumption” were also built. In addition, a school was functioning in the same period.

The renovation of the monastery was started at the time of the abbot Rafail, during the 40es of the 19th century. The residential buildings were built at that time, whereas the new church was finished in 1845. Gradually, the renovated Dryanovo monastery became a religious and cultural centre and one of the largest and well-kept cloisters in the region of Turnovo. 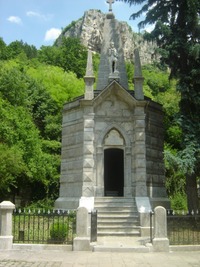 The history of Dryanovo Monastery is closely related to the struggles of Bulgaria nation for liberation. . One of the main quarters of the Bulgarian Central Revolutionary Committee in Turnovo was located exactly in the monastery and famous rebel leaders such as Vassil Levski and Georgi Izmirliev were often found there.
There was a secret storeroom for food and arms, which was the reason why rebel leaders Priest Hariton and Bacho Kiro used the monastery as their fortress at the time of the April uprising. In the course of 10 days the rebels stood against the pressure of the Ottoman troops. After the rebel had been defeated, the monastery was set to ashes, but later on it was restored. In 1897 an ossuary was raised in memory of the perished insurgents.

At present, Dryanovo Monastery is functional. 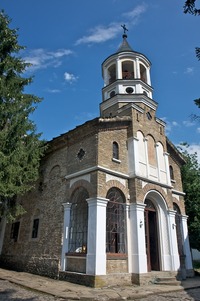 The monastery has its appearance since 1880 when it was completely restored after its conflagration by Ottoman Turks during April Uprising. In fact, only the temple has been preserved since then and it has been kept in its original condition. Out of 3 domes of the church only one has remained until the present day. Like a number of monastery’s church from the middle of 19th century, the temple is believed to having possessed three domes-one above the entrance and one below the altar.

In the 30ties of 20th century a church tower was built on the west wall of the church and an arch narthex on the north wall.
The main church of that time had a single nave and was half-hidden in the ground.

A museum collection with exhibits from all historical epochs, including Neolithic finds discovered in the nearby cave Bacho Kiro, can be visited in Dryanovo Monastery.
The exhibition “Archaeology and Revival” of Dryanovo History Museum also houses in the monastery and it presents to the visitors the history of Dryanovo area and the origin of the monastery.

Valuable icons housed in a small building near the church tower can be seen in Dryanovo Monastery.
The holy shrine is one of 100 Bulgaria’s National Tourist Objects.
Telephone number of the monastery:+359/International code for dialling Bulgaria/ 0676 2389; 062 25670

The Dryanovo monastery offers accommodation in cosy double and triple rooms. A few restraurants with traditional Bulgarian cuisine are scattered in the immediate neighbourhood of the monastery.

The cave Bacho Kiro is situated only 300m to the west of Dryanovo Monastery.
It is long 3500m and it is the first well laid out cave in Bulgaria. The cave is also one of the 100 Bulgaria’s National Objects.

Dryanovo eco path near the Dryanovo Monastery was found in 2000. The route passes along the picturesque gorge of Dryanovo River. The path is long 3km and it has suitable places for a break, picnics and platforms for birds’ observation.

Near the monastery the remnants of two fortresses “Boruna” and “Gradat” can be found.

Hi! Is it possible to reserve a double room for 2 persons for one night in next september 20? And how much?
It's a experience very special for us. We come from Canada. Thank you very much.

Thank you for posting very informative Article for us. very helpful.

Great post i must say and thanks for the information. Education is definitely a sticky subject. However, is still among the leading topics of our time. I appreciate your post and look forward to more.

Which can give good results short-term, and yet it’s not really plausible long-term method for the purpose of blokes who would like to turn out to be repair a particular wonderful person many can’t give up enthusiastic about.